Glaciers, sea ice, and continental ice sheets are being affected by climate change worldwide. NASA calls them "Sentinels of Change." In this section, you will examine plots of temperature trends in the polar regions available as time series from the NASA Goddard Institute for Space Studies (GISS). Data provides the backbone support of a STEM lesson and as you complete the following activities, you should think about how you may implement these data activities with your students.

Begin this data exploration by taking a look at the "Global Ice Viewer" to see why scientists are so concerned about the melting of the Earth's ice. Explore the interactive and determine where you think Earth is losing the most ice. Explore the interactive to see how climate change has affected glaciers, sea ice, and continental ice sheets. You can view comparison images of glaciers in specific areas, videos of glaciers changing over specific time periods and seasonal sea ice changes trending over time. What stories do these tell us about global climate change? 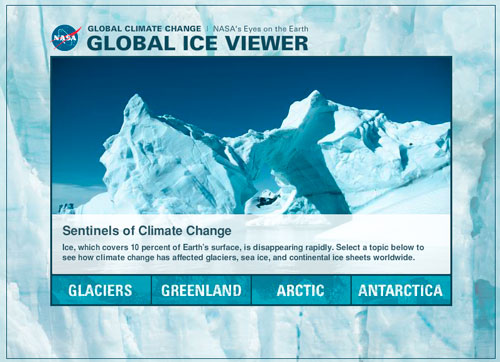 The data for this exercise comes from the GISS "Combined Land-Surface Air and Sea-Surface Temperature Anomalies (Land-Ocean Temperature Index, LOTI)" data set for Zonal annual means. These data are arranged into temperature index zonal (latitudinal zones) areas of selected latitudinal extent so that users can plot time series of annual means for various latitudinal zones of the Earth from 1880 to the present. Note that the data are presented as a temperature index in degrees Celsius relative to the period 1951-1980 rather than absolute temperatures.

Review the "Zonal and Global Mean Annual Temperature" graph which presents change in temperature from 1880-2010. You can compare change in the Northern Hemisphere (red line), Southern Hemisphere (yellow line), and the Global (blue line) mean annual temperatures. Both annual data and smoothed data are presented. The plot of annual data presents every year in the record and shows considerable variability from year to year while the smoothed data averages the data for a defined length of time to reduce the variability while emphasizing the overall trend.

The "Antarctic and Global MAT Anomaly" graph shows Global and Antarctic temperature anomalies, in the zone 64° South latitude to 90° South latitude encompassing the Antarctic continent (blue line). Linear trend lines and the equations for these lines are also plotted.

How can the use of these data sets help your students understand the compelling evidence that the poles are warming faster than the Earth as a whole, and reasons behind this warming?
Explain ›
[[MODULE||PBSModules.Footer||2]]