Begin your exploration with NASA's "Tour of the Cryosphere." This powerful video demonstrates the cryospheric process as observed by NASA satellites in space. Although most ice exists in the cold polar regions, pay attention to those areas in North America that are also experiencing changes in ice cover. 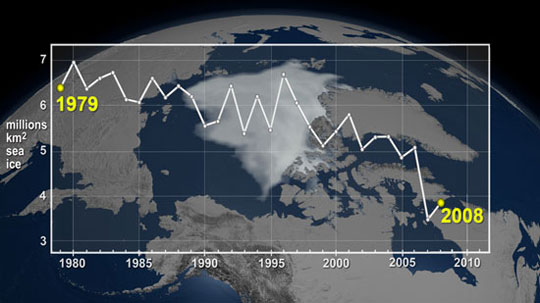 The area of the Arctic Ocean that is covered by sea ice increases during the winter and decreases during the summer. Data-maps from NASA satellites tell us that over at least the past 30 years, the area covered by Arctic sea ice has declined dramatically, with the most extreme decline seen in the summer melt season. Arctic sea ice is important because it reflects sunlight, keeping the polar regions cool and thereby moderating global climate.

Watch the video "Arctic Sea Ice" as an introduction to the topic of Arctic ice and global climate change. As you watch, keep in mind the following questions: As ice retreats, how does this affect the amount of radiation that is absorbed on Earth? Is the thickness of sea ice as important as the actual extent of the ice? How does this phenomenon happening in the Arctic affect people living in North America?

Begin your exploration by investigating the role of the cryosphere in North America, the extent of permafrost in the Northern Hemisphere, and how the polar regions play a role in regulating global climate. Watch "Earth's Cryosphere: The Arctic" and determine some of the ways the cryosphere influences climate and identify some of the features that are changing in the Arctic. What are the global impacts?

We can describe any system in terms of its inputs, outputs, and feedbacks. Take a closer look at the cryosphere, part of the Earth system, and see how a glacier owes its existence to a balance of inputs and outputs. Investigate the interactive "Melting Glaciers" to see how glaciers change over the course of a year. How are changes in snow lines evidence of changing environmental conditions?

Scientific evidence strongly suggests that different regions on Earth do not respond equally to increased temperatures. Ice-covered regions appear to be particularly sensitive to even small changes in global temperature. View "Earth System: Ice and Global Warming" from PBS LearningMedia to see what impact global climate change has on the balance between glacier inputs and outputs. What effects would a rise of two feet in sea level by the year 2100 have on humans?

Make a list of at least three functions ice has in the climate system. You will use this list later in this section.

We can describe our climate system in terms of climate forcing factors and system feedbacks. Climate forcings are the attributes of the Earth's climate system that drive change in climate. These forcings can be generated by nature, such as variability in solar irradiance, or generated by human activity, such as black carbon from the incomplete burning of fossil fuels.

Understanding climate change is complicated by feedbacks within the climate system. Climate feedbacks are Earth system interactions that are set in motion from the effect of a forcing factor on one part of the system. Feedbacks amplify (positive feedback) or dampen (negative feedback) the effect of a forcing factor, or cause additional change in another part system. Refer back to your list of at least three functions ice has in the climate system.

Albedo is a measure of the reflectivity of the Earth's surface. Ice-albedo feedback is a strong positive feedback in the climate system. Warmer temperatures melt persistent ice masses in high elevations and upper latitudes. Ice reflects some of the solar energy back to space because it is highly reflective. If an equivalent area of ice is replaced by water or land, the lower albedo value reflects less and absorbs more energy, resulting in a warmer Earth. 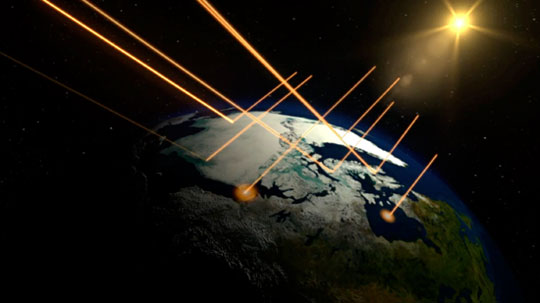 The Arctic's climate is unique, because it is where the planet's greatest variations occur. The Arctic also plays an important role in regulating the Earth's climate. View the video "Arctic Climate System" to see how the effects of global warming in the Arctic could have consequences throughout the world.

Evidence indicates that regions of the planet that are experiencing more rapid warming than other parts of the Earth, for example, the Arctic, do so because significant positive feedback is taking place in the region. You have already identified albedo as a powerful positive climate feedback. Look at another positive feedback in the Arctic climate system that involves the Arctic's permafrost. Read the article "Just 5 Questions: What Lies Beneath." As you read, consider what happens when permafrost changes. What is the domino effect that occurs when permafrost degrades?

Now watch the video "Losing Permafrost in Alaska. What kinds of life-altering effects can be expected from an increase in average temperature of just a few degrees Celsius?

What is the "positive feedback loop" described in the video and what is its effect on climate in Alaska and other areas?

Melting permafrost creates yet another positive feedback loop in the warming climate system: release of the greenhouse gases CO2 and methane. Methane is a highly potent greenhouse gas that is five times stronger than CO2. Investigate how soil microbes in permafrost may be actively decomposing organic matter throughout the Alaskan winter and contributing significant amounts of carbon dioxide to the atmosphere by watching "Soil Microbes and Global Warming." Consider how the permanent melting of the permafrost in an area impacts microbial communities and what possible impacts on the broader ecosystem could result. Review what you have learned about melting ice and why scientists consider the health of our cryosphere a "vital sign" of our planet by watching "Shrinking Ice, Rising Seas."

How can you help your students understand the importance of Arctic ice and its correlation with global climate change?

How can you engage them in wanting to learn more about the cryosphere and the effect it has on their own lives?