Understanding the Earth as a System

"The current American science education reform movement advocates Science For All Americans. National education goals have created new benchmarks to prepare students with science literacy and habits that they can practically apply and that connect science, society, and technology. The National Council on Science has recognized that there are a number of common themes that cut across all science disciplines that help organize ideas and guide scientific inquiry. These themes ... include systems, models (physical, conceptual, and mathematical), stability and equilibrium, conservation, symmetry, patterns of change (trends, cycles, and chaos), evolution (possibilities, rates, and interactions), and magnitude and scale."

Systems thinking also helps to organize science content into a structured body of knowledge that makes more sense to novice students who can be easily turned off by scientific content because it often appears as a jumble of disconnected facts.

Watch the "Earth as a System" video from PBS LearningMedia and think about some of the interactions between the air, land, water, and life.

One of the most important changes in our approach to the Earth sciences is the integrating idea of the Earth as a system. In other words, when it comes to phenomena that take place in our natural systems, "everything is connected to everything else," (ECEE). The idea of the Earth as a system is one of the reasons that scientific investigations are becoming more and more interdisciplinary. With ECEE as a fundamental way of looking at the world around us, we have an inquiry structure that predisposes scientists to look at change in one sphere, such as atmosphere, and see if there are impacts of that change in another sphere, such as the hydrosphere or lithosphere.

Watch these two videos "There's No Place Like Earth" and "Frozen Earth" and consider what it means to look at Earth as a system. 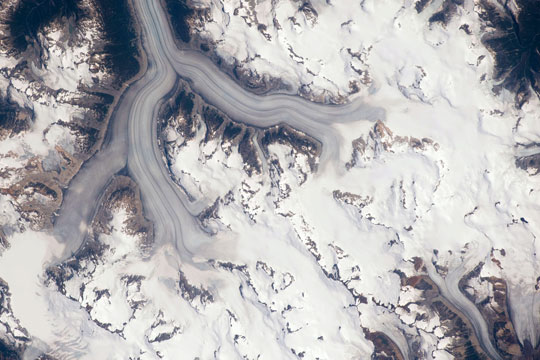 Systems are identified by several components: inputs, outputs, and feedbacks. Look at the following diagram and make note of these components in the Arctic climate system over time. 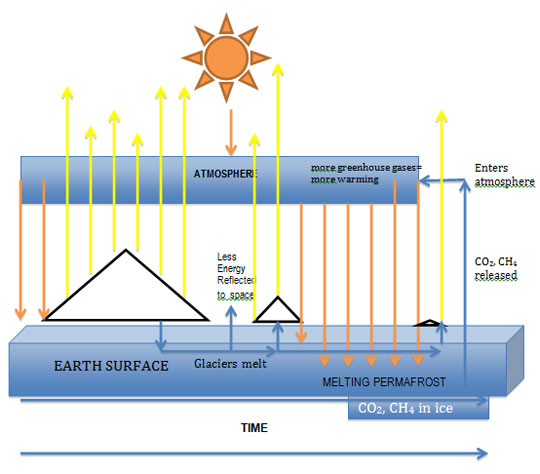 This diagram shows the Arctic climate system over time, showing positive feedbacks. Note that the ice-albedo feedback increases melting permafrost, and melting permafrost adds more greenhouse gases to the atmosphere, which exacerbates the melting of ice and loss of albedo.

Now that you have ascertained some of the positive feedbacks that take place at the Earth's poles, think again about the Earth as a system. How does the presence or absence of ice at the poles impact the atmosphere and ocean, and ultimately, the rest of the planet? The answers to these questions are answered by Dr. Tom Wagner, Cryosphere Scientist at NASA in the video "Earth's Climate Gets a Checkup: Operation IceBridge." Some of the technological tools used to map ice are also described.