Glaciers and ice sheets cover more than 10 percent of the Earth’s land surface — spanning over 6 million square miles (15.5 million square kilometers) of glaciers, ice caps and ice sheets. Scientists like Dr. Waleed Abdalati are working to improve our understanding of how changes in the planet’s snow and ice (otherwise known as the “cryosphere”) affect our climate. Gretchen Cook-Anderson asked Abdalati a handful of questions about ice and its role in climate change.

1. How are ice and climate change linked? Ice plays a number of different roles in our climate. First, it helps moderate the temperature of our atmosphere. It’s white and reflective and keeps the Earth cool by reflecting sunlight and radiation back into space. Ice also serves as a barrier between the Earth and the atmosphere, controlling the exchange of energy between the ocean and the air. And melting ice is the primary contributor to sea level rise.

More than 220 feet (66 meters) of sea level rise is locked up in the Earth’s ice sheets. While I don’t think we have any reason to fear they’ll all disappear tomorrow, melting ice could have quite large implications for sea level. Just one or two feet of sea level change can have major impacts on coastal regions and on society in general.

2. What do we know about ice now that we didn’t know 5 or 10 years ago? Generally speaking, everything is happening a lot faster than we ever thought it would or could just five years ago. Sea ice has been shrinking more rapidly than even the models have predicted. At this rate, we’re looking at an ice-free summer in the Arctic in the next couple of decades — which will be upon us sooner than we realize.

Ten years ago, we didn’t know that if temperatures go up only a couple of degrees Celsius (3.6 degrees Fahrenheit) at the surface of the planet, ice sheets can respond very quickly. Rising temperatures speed up the flow of outlet glaciers that deposit ice directly into the oceans, causing sea level to rise.

3. What are NASA’s GRACE satellites telling us about how ice is changing? NASA’s Gravity Recovery and Climate Experiment (GRACE) satellites are giving us direct information on how the mass of Earth’s ice is changing. Other methods require us to infer those changes, for example from measurements the speed at which melt occurs. But by tracking changes in the planet’s gravity field, which are triggered by movements of water anywhere on the globe, GRACE provides the answers on a large scale like no other satellite. If you’re clever in how you analyze the satellite data, GRACE can also offer answers about where the ice is shrinking and by how much or, alternatively, where it’s growing. I use GRACE data to analyze patterns in ice change, but they also help us identify the “hotspots” on Earth where changes in ice and water may have the most dire societal or environmental impact, so that researchers like me can focus our energies there and understand the mechanisms at play.

4. Though NASA will decommission the Ice, Cloud, and land Elevation Satellite (ICESat) soon, we know that researchers continue to gain new insights into changes in ice cover from its data. What has ICESat uncovered? The amount of sea ice in the Arctic during the summer is disappearing at a surprisingly high rate, losing about 10 percent per decade in terms of area. But its thickness is something we haven’t understood very well. To date, we’ve only been able to quantify with any real confidence the geographic area that Arctic sea ice covers. ICESat has enabled us to estimate ice thickness by measuring the height of ice above water, and inferring how much lies beneath. It quite literally adds a new dimension to ice sheet research, providing clues as to how much the sea ice is thinning and how vulnerable it is to future loss. In addition, it’s been instrumental in giving us an inventory of Antarctica’s subglacial lakes, massive bodies of water beneath the surface that have rapidly receded or — in a few instances — disappeared altogether over the last few years.

ICESat's follow-on mission, ICESat II, is expected to launch in 2015. It will help us really get at why ice is changing, and why it’s snowing more or less in different areas.

5. What is the most critical part of the world where we know the least about changes in ice and how they affect climate? And what is the international scientific community doing to respond to any related challenges? Although I think it’s difficult to separate the importance of land ice from sea ice, the stability of the ice sheets in Greenland and Antarctica is highly critical. In Greenland we can get up there and put people in the field. Antarctica, however, is a tougher nut to crack when it comes to making measurements by way of field expeditions. Organizations like the National Science Foundation (NSF) have made major and sustained investments into learning more in Antarctica, alongside the efforts of other federal agencies and a global network of research institutions. All of this work culminated during the recent International Polar Year, which focused on the Arctic and Antarctic from March 2007 to March 2009. NASA is also attacking ice measurement dilemmas with GRACE, through a major project called Operation Ice Bridge and in the future with the new ICESat II satellite. 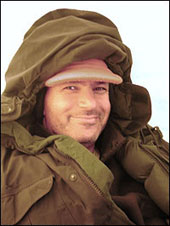 Affiliation: University of Colorado, Boulder. Abdalati gained international recognition as a leading cryospheric scientist at NASA for 12 years before directing the Earth Science and Observation Center at the University of Colorado’s Cooperative Institute for Research in Environmental Sciences, where he is also an associate professor of geography.

Education: Degrees in atmospheric and ocean sciences and aerospace engineering from the University of Colorado, Boulder.