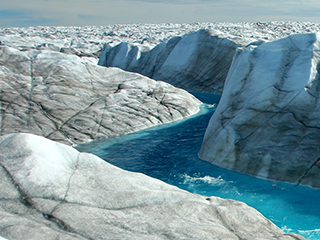 NASA’s TIMED mission, short for Thermosphere, Ionosphere, Mesosphere Energetics and Dynamics, has confirmed a surprisingly fast carbon dioxide increase in Earth’s upper atmosphere, raising questions about how different layers of the atmosphere are interconnected. Even more curious—though climate models predict carbon dioxide should increase more or less equally across the globe, in its 14 years of data collection, TIMED observed a much faster increase of carbon dioxide above the Northern Hemisphere.

This study, published in Geophysical Research Letters on Sept. 5, 2015, uses 14 years of data from a radiometer on board the TIMED satellite, the first satellite capable of making long-term measurements of carbon dioxide concentration in the upper atmosphere when it launched in 2001.

“Before TIMED, the only measurements of carbon dioxide in the upper atmosphere were direct measurements from sounding rocket research flights and short-lived spaceborne sensors,” said Jia Yue, a researcher at Hampton University in Hampton, Virginia, and lead author on the study. “But it’s impossible to study long-term trends from snapshots.”

Furthermore, they discovered that the carbon dioxide in these upper layers, long thought to follow the same patterns across the globe, is increasing faster over the Northern Hemisphere. Though the Northern Hemisphere produces much more carbon dioxide because of its greater land area and population, scientists expect the difference to become negligible at such great heights due to diffusion and mixing.

This study’s result also confirms a second set of data from a satellite with capabilities similar to TIMED—the Canadian Space Agency’s SciSat-1, launched in 2003. An analysis of eight years of SciSat-1 data gave the first indication of the accelerated increase of carbon dioxide in the upper atmosphere.

“The support between observations by TIMED and SciSat-1—which use different remote sensing techniques to detect carbon dioxide—confirms that the quick increase is a real, physical trend, and not an artifact of any instrument or data,” said Yue.

Identifying these unexpected trends was only possible because of the long lifespan of TIMED’s radiometer, which is still operating well. The TIMED satellite, originally slated for a two-year mission ending in 2003, has been granted six extended missions. TIMED’s current mission is set to end in 2017, but scientists are hopeful that data collection will continue.

“Long-term studies are necessary to understand trends like this,” said Janches. “TIMED has lasted so long that it’s like a completely different mission—we can do entirely new science when we have long periods of continuous observation.”

NASA Goddard manages the TIMED mission for the Heliophysics Division within the Science Mission Directorate at NASA Headquarters in Washington. The Johns Hopkins University Applied Physics Laboratory in Laurel, Maryland, built the spacecraft for NASA.