In space, far above Earth’s turbulent atmosphere, you might think the one thing you don’t have to worry about is weather. But you would be wrong. Just ask the people charged with the safety of the Cloud-Aerosol Lidar and Infrared Pathfinder Satellite Observation (CALIPSO), one of the climate-research satellites orbiting our planet. When the sun hurled an enormous electromagnetic storm at us in mid-June, they were forced to shut down CALIPSO’s laser instrument for 11 days to prevent potentially catastrophic damage.

CALIPSO’s operators heeded a warning from the Space Weather Prediction Center (SWPC) run by NOAA, the National Oceanic and Atmospheric Administration. SWPC’s ability to forecast space weather is about to improve thanks to a new spacecraft called the Deep Space Climate Observatory (DSCOVR), which has just taken its sentry post a million miles sunward of Earth. A number of spacecraft currently report solar activity to the SWPC, but DSCOVR is the first deep-space spacecraft whose primary mission is to keep an eye on space weather.

What are these storms in space? They start on the surface of the sun, when titanic magnetic forces launch enormous blobs of the sun’s surface into space at millions of miles per hour. These blobs are called coronal mass ejections (CMEs) and consist of magnetic field and plasma—largely protons, the nuclei of hydrogen atoms, but also the nuclei of heavy elements like oxygen and iron.

When a CME smashes into Earth’s magnetic field, it triggers beautiful auroras but it can also play havoc with power grids, radio communications and satellites. And then there’s the effect on the solar wind, a constant outflowing of particles from the sun that streams through space.

(Way) faster than a speeding bullet

CMEs often generate shock waves similar to what happens when an aircraft breaks the sound barrier in Earth’s atmosphere. But the solar wind’s equivalent of a sonic boom can accelerate protons up to millions of miles per minute—as much as 40 percent of the speed of light. The result is called a solar radiation storm.

The ultra-fast, ultra-high-energy protons and other nuclei in these storms create their own hazards for satellites and radio communication, as well as for people in space and even in aircraft flying at high latitudes and altitudes.

The particles comprising CMEs and solar radiation storms are too sparse to buffet spacecraft like an earthly hurricane attacking a ship. But they pack an electrical punch that can disrupt or even kill sensitive computer chips and other components onboard satellites.

A particularly severe CME-induced geomagnetic storm in 1859 electrified telegraph wires, causing sparks that shocked telegraph operators and set paper on fire. A storm in 1989 collapsed northeastern Canada’s power grid. In 2003, more than half of the year’s spacecraft anomalies took place during CME-triggered geomagnetic and solar-radiation storms.

Earth orbiters often encounter charged particles just from flying through the Van Allen radiation belts that envelop most of the planet, so to some degree they are built to take such interlopers in stride. Many microchips are hardened against radiation. Software routines can reject the results of a bit flip (when an energetic particle switches a 1 to a 0 or vice-versa, also called a “single-event upset”). If they detect trouble, spacecraft with high levels of autonomy can put themselves into safe mode, turning off vulnerable systems to prevent further damage. Still, as with CALIPSO, some components need special attention. And virtually all spacecraft operators want the option of taking space weather into account.

“If it’s getting to the level of activity where aviation and power grids are worrying about it, we are worrying about it too,” said Bill Guit, Mission Director for NASA’s Aqua and Aura satellites. His concern is primarily for one instrument onboard Aura, the Microwave Limb Sounder (MLS). According to Dominick Miller, who is operations lead for that instrument, a CME can short out and fry a particularly vulnerable MLS microchip. Aura’s operators have instructions to shut down MLS if the intensity of a solar-particle storm reaches a certain threshold. It hasn’t happened yet, but it’s come close.

Even the operators of highly autonomous satellites like NASA’s Orbiting Carbon Observatory (OCO-2) appreciate SWPC keeping a weather eye on solar storms. “If we were to know ahead of time that a hazard is coming, there are a few things that we might want to do,” said Ralph Basilio, OCO-2’s project manager. “For example, closing the door to the instrument to eliminate even the remote possibility of getting direct sunlight onto the focal plane arrays if spacecraft attitude control could not be maintained.”

He added that if his team were planning to fire the spacecraft’s thrusters, as they do from time to time to compensate for drifting away from the optimal orbit, they would consider delaying the maneuver. “We would hate for a thruster to be commanded open and stay open because we had a single-event upset,” he said.

“The only time that we would have a problem (with a delay) is if we were about to do a maneuver to avoid an object—a micrometeoroid or some object in Earth orbit—which we do, by the way, often,” said Richard Kemski, OCO-2’s Mission Assurance Manager. “Then the question becomes, what is more likely? That we're going to have a problem with the solar event or we're going to smack into something and die anyway?”

Space weather is also important to consider before launching a mission, said Kent Kellogg, project manager for NASA’s SMAP (Soil Moisture Active/Passive) mission. “Before you hit the go button, to have last-minute data that says space weather is going to be clean while you do the separation and initial operations, that would be good,” he said. “When you are getting solar arrays, antennas and instruments deployed, it would certainly be good to have that assurance.”

With the addition of DSCOVR, the Space Weather Prediction Center will be better positioned to provide that assurance—or to warn spacecraft operators that it may be time to batten down the hatches.

DSCOVR arrived at L1 in June and is expected to finish its shakedown phase and become operational sometime in August. The mission is a partnership between NOAA, NASA and the U.S. Air Force. 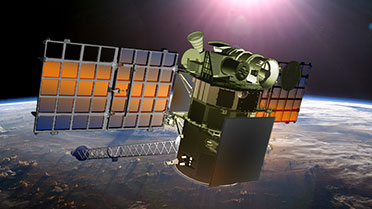 The Deep Space Climate Observatory (DSCOVR) is stationed at a location in space called L1, about a million miles sunward of our planet, where the combined gravity of sun and Earth allow the spacecraft to stay in synch with Earth as both of them orbit the sun.

Since a fast-moving CME on its way to Earth will pass DSCOVR anywhere from 15 to 60 minutes before it reaches us, the spacecraft can radio a warning to us a little ahead of the storm’s arrival. Several sun-observing spacecraft can tell us when a CME leaves the sun, but its estimated arrival time at Earth can only be approximated within about a 14-hour span. DSCOVR will be much more precise.

“Once it hits DSCOVR, by measuring the magnetic field and getting the velocity and density, we can put out very accurate warnings,” said Doug Biesecker, NOAA’s Project Scientist for DSCOVR. “We know the power-grid operators can respond in 15 minutes.” In a pinch, 15 to 60 minutes may be enough to save an orbiting instrument as well.

A changing of the guard

DSCOVR will take over its storm-watch duties from a spacecraft called the Advanced Composition Explorer (ACE), which is nearing the end of its expected lifetime. ACE is a NASA spacecraft whose primary mission is science, but it issues reports on space weather to the SWPC as a sideline. DSCOVR’s primary job will be space-weather sentry, and the reports it issues will be more reliable.

“The ACE data comes down (to Earth) after being processed onboard. And the onboard processor; let's just say it's not very smart,” Biesecker said. “If there is a proton event in progress, if it's intense enough, ACE gets confused and returns invalid data. That happened about 20 percent of the time during the most severe space-weather events in the last solar cycle.” In contrast, DSCOVR will transmit raw data to Earth, where it will be processed using more robust algorithms. The new system will issue warnings faster as well, giving people a little more time to respond.

In addition to helping us protect our climate-research satellites, DSCOVR will engage in some climate research, itself. Two NASA instruments onboard the spacecraft will be pointed at Earth, providing data useful to climate scientists among other researchers. See "NOAA’s DSCOVR to provide ‘EPIC’ views of Earth."