The Yukon Flats National Wildlife Refuge in Alaska encompasses 11.2 million acres, making it slightly larger than the entire state of Maryland. That’s a lot of ground to cover for the refuge’s 14-person staff, especially considering that the best way to get around is by floatplane or boat—or, in the winter, ski-plane, snowmobile or dog sled.

“I would say we’re kind of behind the ball up in Alaska,” said Mark Bertram, a wildlife biologist supervisor at the refuge. “We’ve got invasive species here, and we’re just now starting to deal with them over the last five years. So we’re really behind on the inventory work and just trying to basically establish where invasive species lie.”

Matt Luizza is a Ph.D. student studying ecology at Colorado State University. In the summer of 2014 he and two other CSU students, Amanda West and Linnet Jose, participated in a 10-week NASA DEVELOP program. They used NASA satellite data to model the potential spread of white sweet clover, an invasive plant taking over parts of the landscape near the refuge and endangering the survival of native plants.

“Climate change poses this slower pace of change—increasing or decreasing the suitable conditions for certain species,” Luizza said. “I do think in general, especially for Alaska—where climate is changing faster than a lot of other places in the world—it’s sort of the canary in the coalmine [for] these slower-paced changes.”

Habitat changes, no matter how slow, have a cascading effect on the ecosystem, Luizza said. If a native species’ ability to survive decreases, it increases the likelihood that an invasive species will gain a foothold.

Luizza and his team members used data from the Landsat 8 Operational Land Imager (OLI) to create fine-scale potential species distribution models for the refuge. They looked at a variety of factors, including the amount of moisture and topography of the area, to determine where white sweet clover might creep into the refuge and start growing. The team also looked at similar factors using data from the Moderate Resolution Imaging Spectroradiometer (MODIS) on NASA’s Terra satellite to create a courser scale model on the state level. Then they ran all the data through an open-source modeling program developed by the U.S. Geological Survey and made a series of maps that showed the potential spread of white sweet clover through the ecosystem. They compared and combined these models to see where they all agreed that the habitat was most suitable for the plant.

They then turned these maps over to Bertram and the rest of the U.S. Fish and Wildlife Service staff at the refuge. They are using the CSU teams’ models to guide when and where they spend money and send out teams to look for and treat new populations of invasive species. Bertram said the most common sources of invasive species spread are roads and floatplanes, but with seven airports and thousands of lakes within the refuge, the team’s models help them narrow their focus.

“Historically, we’ve looked at how invaders could potentially spread through trade and transportation—through all sorts of different mechanisms,” said Paul Evangelista, a research scientist at the Natural Resource Ecology Laboratory and director and science advisor for the NASA DEVELOP program at CSU. “However, only recently have we started looking at the influence of climate change. And when you get to areas in the northern latitudes, such as Alaska, or higher elevations such as the Rocky Mountains here in Colorado, we can witness more abrupt changes in climate patterns. So basically we’ve been monitoring, over the last five to 10 years, a surge in the spread of invasive species.”

Even the distributions of native species have been changing, often moving further northward where they aren’t welcome. Evangelista used the example of mountain pine beetles in Colorado. There the beetles are a natural part of the forest lifecycle. Hard winters kill many beetles and eggs, keeping populations in check. As temperatures have warmed, though, the beetles have gone from reproducing once a year to twice a year—resulting in an increase of infestations over the last decade.

Warmer temperatures have also allowed the beetles to move northward into new areas of Canada where the pine trees have no natural defenses against them, Evangelista said.

“The projection [over the next 100 years] is that we’re going to change from a conifer- or a spruce-dominated landscape into more of a grassland, deciduous landscape. That’s a 180 degree change,” Bertram said of the refuge. “We’ve already experienced increases in temperature. We have a two-week longer growing season in Alaska than we had 30 years ago. If those projections continue, then we’re going to switch over to a deciduous kind of grassland habitat and that’s going to open the door to some invasives. It might close the door for others.”

A lifestyle at risk

The Yukon Flats Natural Wildlife Refuge is home to 1,200 Alaska Natives who live a subsistence lifestyle. Invasive plants such as waterweed, which may interfere with salmon and whitefish spawning, pose a very real threat to their way of life.

“One of the purposes for our refuge is to provide for a subsistence opportunity. That’s really one of our mandates,” Bertram said. “It’s very important to the refuge and the Fish and Wildlife Service to understand what potential threats may be down the road that might impact a local person’s opportunity to harvest a salmon or pick blueberries, for instance.”

Much of Luizza’s dissertation research outside of the NASA DEVELOP project revolves around consulting with members of indigenous groups about what kind of changes they’ve been seeing in the climate and invasive populations. Luizza said his aim is to understand the community’s needs and questions and then provide the geospatial tools they need to meet their goals. It’s a collaborative effort between many different organizations, he said, including the U.S. Fish and Wildlife Service, the U.S. Geological Survey, Alaska Natives and state and local governments.

“Having the NASA project was a really nice platform to bring together all these different groups that in many cases weren’t talking to each other but have a lot to offer each other,” he said. 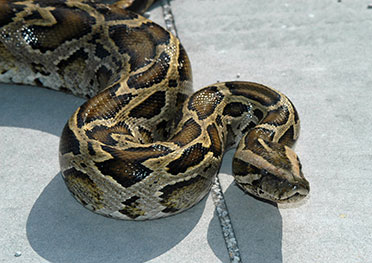 An invasive species is “a species that is non-native to the ecosystem under consideration and whose introduction causes or is likely to cause economic or environmental harm or harm to human health,” according to the National Invasive Species Council. Some popular examples are pythons in Florida, kudzu in the South and zebra muscles in the Great Lakes.