He recently presented the story of air quality in three cities: Beijing, Los Angeles and Atlanta.

Instruments on NASA satellites monitor pollution around the world. One of these, the Ozone Monitoring Instrument (OMI) on the Aura satellite, has observed large amounts of sulfur dioxide, which is released when coal is burned, over Beijing.

Similarly, in the 1950s Los Angeles experienced high levels of another air pollutant—ozone. When in the higher atmosphere, ozone protects Earth from the sun's ultraviolet radiation. But closer to the ground ozone functions as a pollutant. Half a century ago in Los Angeles, levels were sometimes recorded at more than 500 parts per billion by volume (ppbv). (The current National Ambient Air Quality Standard is 75 ppbv.) With the advent of catalytic converters in vehicles and other environmental policy efforts, these levels declined. But what worked to reduce ozone in Los Angeles didn’t work to reduce high ozone levels in another city: Atlanta.

In this video, Duncan talks about the dynamic nature of air quality, what causes ozone, sulfur dioxide, and nitrogen dioxide, and why reducing volatile organic carbon pollution worked to reduce ozone in Los Angeles, but not in Atlanta. 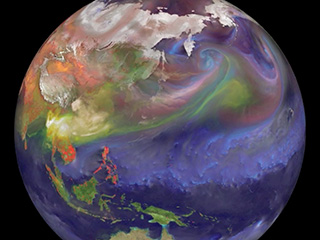 Asian air pollution doesn't stay in Asia. It can cross the Pacific Ocean and affect not only air quality elsewhere, but also global climate and weather. Read more.