Ice formed early and stayed late on the Great Lakes and, at its maximum extent, covered 92.5 percent of the water—the second most extensive ice cover observed on the Great Lakes during the satellite era. Lake Michigan reached 93.3 percent ice cover on March 8, 2014, setting an individual record. The extensive and thick ice cover causes significant difficulties for shipping.

The United States Coast Guard icebreaker Mackinaw attempted to establish a shipping lane and escort three lake freighters from the Duluth area in Minnesota to the locks at Sault Set. Marie, Michigan. Although the locks opened for the shipping season on March 25, 2014, severe ice conditions kept the first freighter from going through until April 4. Part of the ship track of the Mackinaw is shown in the animation (from March 21-24, 2014). Some of the ice cover was as thick as 42 inches in eastern Lake Superior—reminiscent of sea ice in polar oceans. 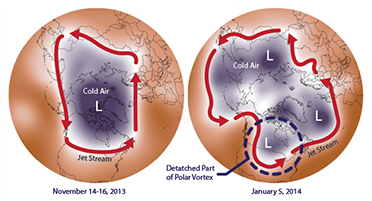 Believe it or not, we want a strong polar vortex to stay warm. When a vortex is strong and healthy, it helps keep a current of air known as the jet stream traveling around the globe in a roughly circular path. This current keeps the cold air up north and the warm air down south.

When the system is weak, it breaks apart because the jet stream does not have much to keep in line. If the areas toward which the pockets of cold air travel contain high-pressure systems, then pieces of the vortex continue being pushed southward.

That’s what happened in early 2014. Places as far south as Tampa, Florida, experienced the wrath of this wandering polar vortex. Most of Canada and parts of the Midwestern United States had temperatures colder than Alaska at the height of this cold snap.

Adapted from an article originally posted on NASA’s SciJinks.