A NASA scientist who has developed a novel suitcase-size instrument to measure column carbon dioxide and methane is taking her recently patented instrument on the road this summer to comprehensively measure emissions of these important greenhouse gases from Alaska’s melting permafrost.

Emily Wilson, a scientist at NASA’s Goddard Space Flight Center in Greenbelt, Maryland, will use her recently patented miniaturized laser heterodyne radiometer (mini-LHR) to carry out a multi-disciplinary field campaign at three sites — each representing a different type of permafrost — near Fairbanks, Alaska, in June. Her team has designed a unique and comprehensive experiment that records permafrost depth and structure, meteorological data, and concentrations of methane and carbon dioxide during the seasonal ground melt.

“With the global mean temperature rising, the release of these gases could create an amplified effect,” she said. “These data will allow us to estimate fluctuation of emissions from the melting permafrost.”

Permafrost is permanently frozen soil. Comprising 24 percent of the Northern Hemisphere, permafrost contains old organic carbon deposits — some relicts from the last glaciation — that are locked up beneath the surface. Scientists have observed that more of the permafrost’s upper layer, or the active layer, is melting each summer, creating concern that the thawing could lead to the significant greenhouse-gas emissions.

Further exacerbating the situation is the fact that while methane doesn’t linger as long as carbon dioxide in the atmosphere, it is more potent and effective at absorbing heat, creating a positive feedback, where emissions leads to more warming, which in turn accelerates the thaw.

Highly portable, the mini-LDR is ideal for permafrost studies, Wilson said. Made up of commercially available components, the instrument literally can go anywhere to measure carbon dioxide and methane in the atmospheric column — that is, the levels of these gases in a vertical column extending from the ground to space. Currently, the only ground-based network that measures these two greenhouse gases in the atmospheric column is the Total Carbon Column Observing Network. However, the network has 22 operational sites globally, with limited coverage in the Arctic.

“We’re targeting areas where there is limited coverage,” she said.

To prepare for the campaign, Wilson made her instrument more rugged and more sensitive. She added a satellite communications port to remotely retrieve data, a thermally controlled instrument housing to protect the instrument from changing temperatures, and a solar grid and battery storage system for powering the instrument in remote locations. 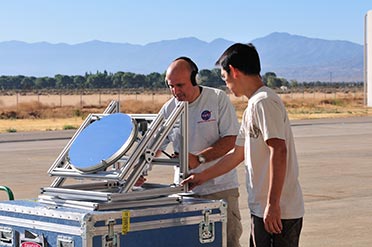 Read about another NASA scientist who is advancing laser technology to measure methane.