Hurricane track forecasts have improved in accuracy by about 50 percent since 1990, but in that same period there has been essentially no improvement in the accuracy of intensity forecasts.

NASA has funded a new mission using a constellation of eight small satellites carried to low-Earth orbit on a single launch vehicle to make accurate measurements of ocean surface winds in and near the eye of the storm throughout the lifecycle of tropical cyclones, typhoons and hurricanes.

The Cyclone Global Navigation Satellite System, or CYGNSS, will be the first to probe the inner core of hurricanes in greater detail to better understand their rapid intensification. The goal is to improve hurricane intensity forecasts.

The first prototype satellite for the mission is being built and tested this summer and fall at the Southwest Research Institute in San Antonio, Texas.

"After a successful preliminary design review and mission confirmation earlier this year, we are currently building, testing and characterizing a complete engineering model of the CYGNSS observatory,” said Chris Ruf, CYGNSS principal investigator at the University of Michigan.

"The lessons learned from this phase will be applied to the manufacture of eight identical flight observatories next year following our critical design review,” Ruff said.

Once in orbit, CYGNSS's micro-satellite observatories will receive direct and reflected signals from Global Positioning System (GPS) satellites. The direct signals pinpoint CYGNSS observatory positions, while the reflected signals respond to ocean surface roughness, from which wind speed is retrieved.

“This mission will help us get a better idea of the intensity of tropical cyclones,” said Frank Peri, director of the Earth Systems Science Program Office (ESSPO), based at NASA’s Langley Research Center in Hampton, Virginia.

CYGNSS is scheduled to launch in late 2016 from Cape Canaveral Air Force Station in Florida aboard a Pegasus XL rocket from an Orbital Sciences Corporation Stargazer L-1011 aircraft. CYGNSS is funded through NASA’s ESSPO and developed by the University of Michigan. 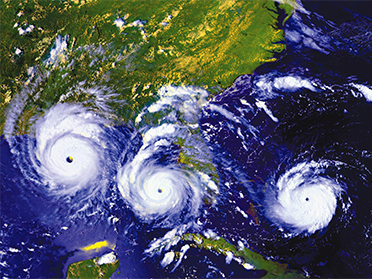 The image above is a compilation of data acquired by the GOES-7 satellite that shows Hurricane Andrew’s progression over three days.

The one way in which global warming could impact hurricanes is by making them more intense. More heat and water in the atmosphere and warmer sea surface temperatures could provide more fuel to increase the wind speeds of tropical storms. Even if tropical storms don’t change significantly, other environmental changes brought on by global warming could make the storms more deadly. Melting glaciers and ice caps will likely cause sea levels to rise, which would make coastal flooding more severe when a storm comes ashore.