Scientists, including a team from NASA’s Langley Research Center, will fly through western skies in August as they test laser-based technologies for measuring atmospheric carbon dioxide.

Langley’s contingent will join teams from two other NASA centers aboard a DC-8 aircraft flying out of a NASA Armstrong Flight Research Center facility in Palmdale, California. Plans call for cruising over the Pacific Ocean, forests in Northern California, the Oregon coast and cornfields in Indiana. Flights should wrap up around the end of August.

NASA Langley, along with the Goddard Space Flight Center in Greenbelt, Maryland, and the Jet Propulsion Laboratory in Pasadena, California, are all honing new carbon dioxide measurement techniques and technologies under a mission called ASCENDS, which stands for Active Sensing of CO2 Emissions over Nights, Days and Seasons.

The systems use lasers to measure the amount of carbon dioxide in the air between the instrument and Earth’s surface. Existing satellites use reflected sunlight to gauge carbon dioxide, so they only work in daylight conditions. Carbon dioxide is considered an important contributor to global warming, so NASA wants to make more measurements under a wider set of conditions.

Langley’s team will measure carbon dioxide using a tool called the Multi-functional Fiber Laser Lidar, or MFLL. Developed by Indiana-based Exelis Inc. (formerly ITT Geospatial Systems), the MFLL is the predecessor of an instrument called the ASCENDS CarbonHawk Experiment Simulator, or ACES, which a team composed of researchers from Langley, Exelis and other partners have developed.

“Any instrument could potentially have bugs, and stuff you have to work out, precision issues that you have to demonstrate,” said Byron Meadows, NASA Langley’s ASCENDS project manager. “That’s what the ASCENDS project here has been all about over the years.” Flights like the ones happening this summer have taken place since 2010.

NASA leadership hasn’t announced plans to build and launch an ASCENDS satellite yet. ASCENDS experiments will help the agency choose the right system when that day comes.

Through efforts like ASCENDS, scientists hope to shed light on what’s happening in Earth’s atmosphere. “That’s what we’re here for,” Meadows said, “to change question marks into periods.” 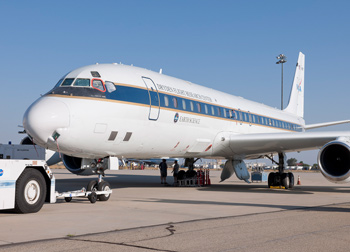 NASA uses this DC-8 flying laboratory for atmospheric research projects. Here, it is parked on a tarmac in Palmdale, California, as ASCENDS team members configure their measurement equipment inside the aircraft.