Manam Volcano in Papua New Guinea, as seen from space on June 16, 2010. Located 13 kilometers (8 miles) off the coast of mainland Papua New Guinea, Manam forms an island 10 kilometers (6 miles) wide. It is a stratovolcano. The volcano has two summit craters, and although both are active, most historical eruptions have arisen from the southern crater.

On June 16, the volcano released a thin, faint plume as clouds clustered at the volcano's summit. Rivulets of brown rock interrupt the carpet of green vegetation on the volcano’s slopes. White clouds partially obscure the satellite’s view of Manam. The clouds may be the result of water vapor from the volcano, but they may also have formed independently of volcanic activity. The volcanic plume appears as a thin blue-gray veil extending toward the northwest over the Bismarck Sea.

Captured onboard a NASA Operation IceBridge flight to survey glacier change in a warming world, this photograph shows a beach and stream in Russel Fjord, Alaska, near the terminus of Hubbard Glacier.

Beached bergs in Alaska
These are the Anti-Atlas Mountains, part of the Atlas Mountain range in southern Morocco, Africa. The region contains some of the world’s largest and most diverse mineral resources, most of which are still untouched. This image was acquired by the Landsat 7 satellite on June 22, 2001. This is a false-color composite image made using shortwave infrared, infrared and red wavelengths. 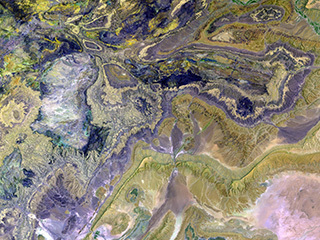 Atlas Mountains
​ A spring phytoplankton bloom off of the Alaskan coast.

Churning in the Chukchi Sea
This image, showing tidal flats and channels on Long Island, in the Bahamas, was taken by an Expedition 26 crew member onboard the International Space Station. The islands of the Bahamas in the Caribbean Sea are situated on large platforms made mainly from carbonate sediments ringed by fringing reefs — the islands themselves are only the parts of the platform currently exposed above sea level. The sediments are formed mostly from the skeletal remains of organisms settling to the sea floor; over geologic time, these sediments will consolidate to form carbonate sedimentary rocks such as limestone. Darker blue shows deeper water, while light blue-green shows shallow water on the tidal flat. The continually exposed parts of the island are seen in brown, a result of soil formation and vegetation growth (left). 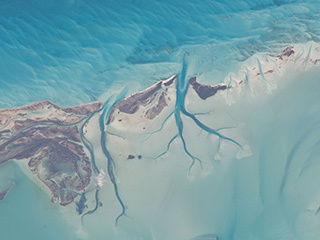 Long Island, Bahamas
Earth and its Moon are nicely framed in this image taken from the aft windows of the Space Shuttle Discovery in 1998. Discovery, on mission STS-95, was flying over the Atlantic Ocean at the time this image was taken. 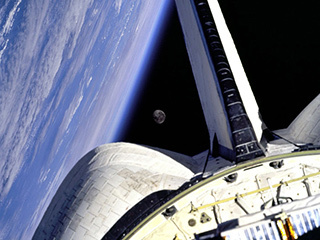 Moon frame
This image, captured by the Landsat-8 satellite, shows the view over Western Australia on May 12, 2013. The image shows rich sediment and nutrient patterns in a tropical estuary area and complex patterns and conditions in vegetated areas.  The image is enhanced and involved masking, separately enhancing and then reassembling water and land portions of the image. The water patterns are the result of an RGB display of Landsat-8’s red, blue, and ultra-blue bands. Land is shown using short-wavelength-infrared, near-infrared and green. 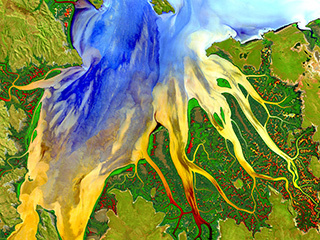 Color explosion
Lake Chad, Africa; February 7 and 11, 2004. Once serving as part of the floor for a much larger Lake Chad, the area now known as the Bodele Depression, located at the southern edge of the Sahara Desert in north central Africa, is slowly being transformed into a desert landscape. In the mid-1960s, Lake Chad was about the size of Lake Erie. But persistent drought conditions, coupled with increased demand for freshwater for irrigation, have reduced Lake Chad to about 5 percent of its former size. As the waters receded, the silts and sediments resting on the lakebed were left to dry in the scorching African sun. The small grains of the silty sand are easily swept up by the strong wind gusts that occasionally blow over the region. Once heaved aloft, the dust can be carried for hundreds or even thousands of kilometers. The remnants of Lake Chad appear in olive-green amid the tan and light brown hues of the surrounding landscape where the countries of Chad, Niger, Nigeria and Cameroon all share borders. The Bodele Depression was the source of some very impressive dust storms that swept over West Africa and the Cape Verde Islands in February 2004, the date of this image. 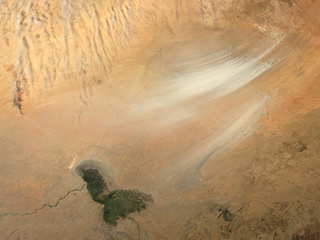 Lake Chad
This false-color image shows snow-capped peaks and ridges of the eastern Himalayas between major rivers in southwest China. The Himalayas are made up of three parallel mountain ranges that together stretch for more than 1800 miles (2,900 kilometers). This particular image was taken by NASA’s Advanced Spaceborne Thermal Emission and Reflection Radiometer (ASTER), flying aboard the Terra satellite, on February 27, 2002. The picture is a composite made by combining near-infrared, red and green wavelengths. 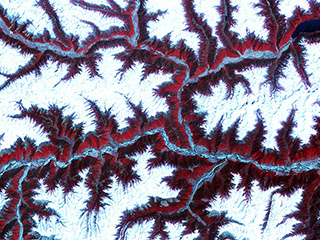 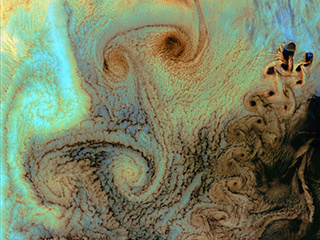 Extraordinary eddies
Some of the most breathtaking views of Earth taken from space are those that capture our planet's limb. When viewed from the side, the Earth looks like a flat circle, and the atmosphere appears like a halo around it. This edge of the atmosphere is known as the limb. Viewed from space, the image of this luminous envelope of gases shielding life on our planet from the dark, cold space beyond rarely fails to fascinate us. What makes this image even more fascinating is the added silhouette of the space shuttle Endeavour. The orange layer seen is the troposphere, where all of the weather and clouds that we typically experience are created and contained. The troposphere gives way to the whitish stratosphere and then mesosphere. This image was captured by an astronaut prior to Endeavour's rendezvous and docking with the International Space Station on February 9, 2010. 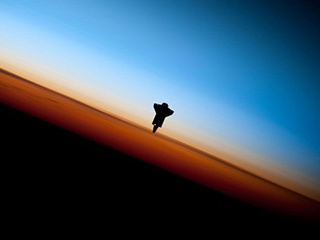 Endeavour
With autumn's arrival, chlorophyll begins to cede its dominance in the photosynthetic process, revealing yellow and orange tones on land, while in the ocean and lakes, phytoplankton pigments highlight different water masses and current systems.

Photosynthetic pigments by land and sea
Vivid colors and bizarre shapes come together in this artistic, fantastical image, taken from space on June 15, 2005. The labyrinth of exotic features was spotted along the edge of Russia's Chaunskaya Bay (shown by the vivid blue half circle) in northeastern Siberia. Two major rivers, the Chaun and Palyavaam, flow into the bay, which in turn opens into the Arctic Ocean. Ribbon lakes and bogs are present throughout the area, created by depressions left by receding glaciers. 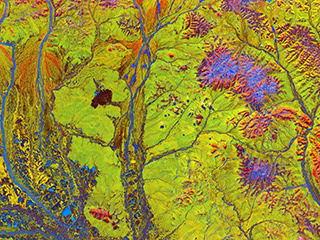 Siberian ribbons
This beautiful image, taken on 11 January 2001, shows a geological formation in the Maur Adrar Desert in Mauritania, Africa. Known as the "Richat Structure," this snail-shell-like formation was created when a volcanic dome hardened and gradually eroded, exposing onion-like layers of rock. 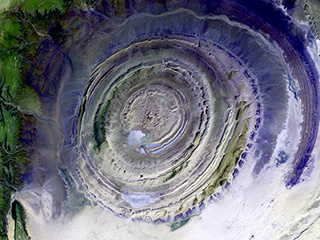 Geologic delight
On the edge of the Kalahari Desert in Namibia, sand dunes are encroaching onto once-fertile lands in the north. Healthy vegetation appears red in this image; in the center, notice the lone red dot. It is the result of a center-pivot irrigation system, evidence that at least one optimistic farmer continues to work the fields despite the approaching sand. This image was acquired by the Landsat 7 satellite on August 14, 2000. This is a false-color composite image made using near infrared, red and green wavelengths. The image has also been sharpened using the sensor's panchromatic band. 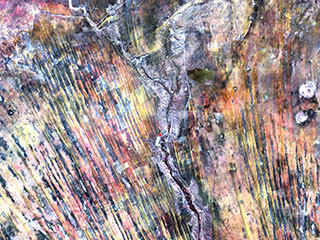 'The Optimist,' Kalahari Desert, Namibia
The United States' first spacewalk, made by Ed White on June 3, 1965 during the Gemini 4 mission. On the third orbit, White opened his hatch and used a hand-held manuevering oxygen-jet gun to push himself out of the capsule. After the first three minutes the fuel ran out and White manuevered by twisting his body and pulling on the tether. His extra-vehicular activity started over the Pacific Ocean near Hawaii and lasted 23 minutes, ending over the Gulf of Mexico. The photograph was taken by commander James McDivitt. 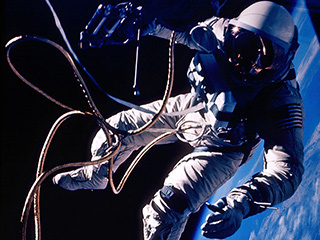 Suwannee blackwater river meets the sea
Curling snow drifts are magnified by the terrain around the 1,400 mile Dnieper River, flowing from Russia to the Black Sea.

The wild, frozen Dnieper River
This photo from NASA’s Curiosity rover shows the Earth as seen from the surface of Mars, shining brighter than any star in the Martian night sky. Earth is the bright point of light a little left of the image’s center and our moon can be seen just below Earth. Curiosity, which landed on the red planet on August 6, 2013, is the largest and most advanced rover ever sent to Mars. It studies the geology of its surroundings and has found evidence of a past environment well-suited to support microbial life. Researchers used the left-eye camera of Curiosity's Mast Camera (Mastcam) to capture this scene about 80 minutes after sunset on the 529th Martian day, or sol, of the rover's work on Mars (January 31, 2014). The image has been processed to remove cosmic-ray effects. A human observer with normal vision, if standing on Mars, could easily see Earth and the moon as two distinct bright evening ‘stars’. When Curiosity took the photo, Earth was about 99 million miles (160 million kilometers) from Mars. This picture adds to our collection of photos of planet Earth from afar, giving a unique perspective to our place in the cosmos. 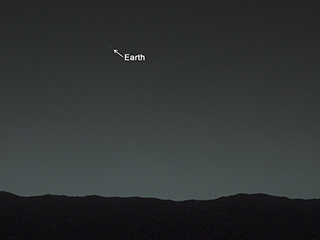 Earth from Mars
This scar on an arid landscape is the dry riverbed of the Ghadamis River in the Tinrhert Hamada Mountains near Ghadamis, Libya. This image was acquired by the Landsat 7 satellite on November 6, 2000. This is a false-color composite image made using near-infrared, green, and blue wavelengths. The image has also been sharpened using the sensor’s panchromatic band. 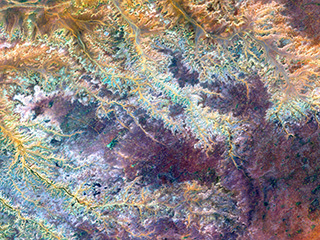 Ghadamis River in Libya
Nicknamed “Dragon Lake,” this body of water is formed by the Bratskove Reservoir, built along the Angara River in southern Siberia, near the city of Bratsk. This image was acquired in winter, when the lake is frozen. This image was acquired by the Landsat satellite on December 19, 1999. This is a natural color composite image made using blue, green and red wavelengths.

Dragon Lake, Siberia
Byrd Glacier, Antarctica, is a 15-mile- (24-kilometer-) wide, 100-mile- (161-kilometer-) long ice stream that plunges through a deep valley in the Transatlantic Mountains and into the Ross Ice Shelf. It moves towards the sea at a rate of about half a mile (0.8 kilometers) per year. This snapshot of the glacier was taken on January 11, 2000. 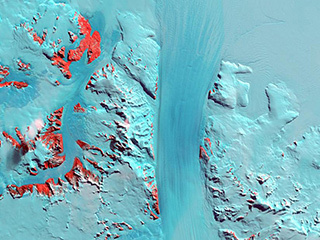 Byrd Glacier
This spectacular 'blue marble' image is the most detailed true-color image of the entire Earth to date. Using a collection of satellite-based observations, scientists and visualizers stitched together months of observations of the land surface, oceans, sea ice, and clouds into a seamless, true-color mosaic of every square kilometer (0.4 square miles) of our planet. Much of the information contained in this image came from NASA’s Moderate Resolution Imaging Spectroradiometer (MODIS) onboard the Terra satellite. Visualization date: August 2, 2002. 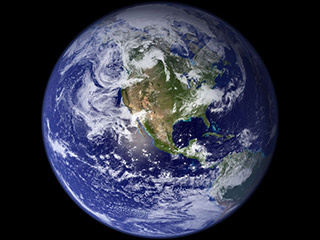 Blue marble
The first television picture of Earth from space. Image taken by TIROS 1 on April 1, 1960. 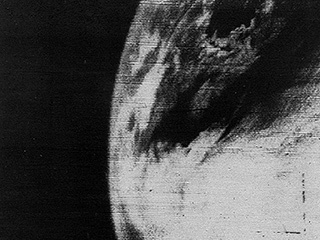 TV debut
As part of the Arctic Boreal Vulnerability Experiment (ABoVE), NASA scientists are flying over Alaska and Canada, measuring the elevation of rivers and lakes to study how thawing permafrost affects hydrology in the landscape. 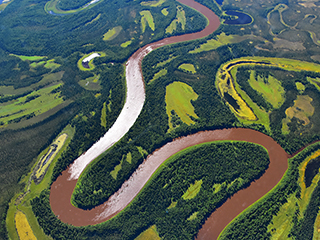