Ocean tides are not simple. If our planet had no continents, tides would be hemispheric-sized bulges of water moving westward with the moon and sun. This animation shows the tides as a complex system of rotating and trapped waves with a mixture of frequencies. Waves run relatively unimpeded westward only around Antarctica. Even there, we see a complicated pattern as waves merge from the north and others separate northwards or southwards under Antarctic ice shelves.

In the North Atlantic, we see waves mainly rotating anti-clockwise, with small amplitudes in the middle of the ocean and high amplitudes around the boundaries, especially along the coasts of northwest Europe and Britain. Waves are trapped and rotating around New Zealand, causing a high tide on one side of the islands with a simultaneous low tide on the other side.

The Topex/Poseidon and Jason satellite altimeter missions were designed to observe and record this complexity. Altimeters on these missions acted as flying tide gauges. After several years collecting data, researchers could analyze the signals at each ocean location to determine the tidal characteristics. With that knowledge, plus near-perfect knowledge of the motion of the Sun and Moon, the tide can be predicted at any location and at any time in the future.

The data used in this visualization run for slightly longer than one Earth day. The level of the tides is exaggerated in order to show how the tides vary around the world.

Carbon Emissions from Fires: 2003-2018
NASA explores. From its earliest days of sounding rockets and balloon-borne instruments, to Apollo and Hubble and missions to Mars. This mission of exploration has also always focused on our own corner of the universe, Earth - the home frontier. Earth is still the only planet we've ever been to, as this video explains.

Home Frontier
​ A spring phytoplankton bloom off of the Alaskan coast.

Churning in the Chukchi Sea
The Mackenzie River in Canada plays a major role in Arctic climate as warmer fresh water mixes with cold seawater.  This image was taken by the Operational Land Imager on the Landsat 8 satellite on July 18, 2017.

Efecto invernadero
Join NASA Earth scientists for a 360-degree view of our planet as they head into the field to study ice in Greenland and coral reefs in Hawaii. 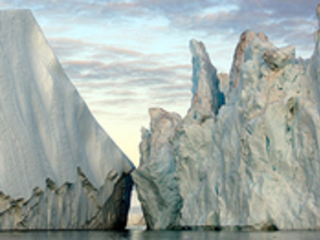 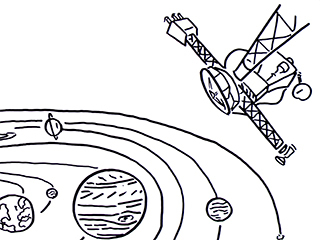 Suwannee blackwater river meets the sea
A view from one of our flying science laboratories over the ice in Greenland during Operation IceBridge. 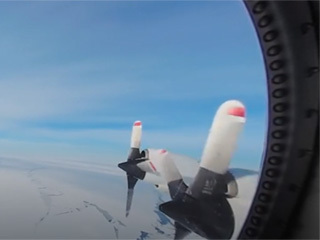 Inside NASA's P-3 aircraft
Video: Using observations from NASA's Orbiting Carbon Observatory (OCO-2) satellite, scientists developed a model of the behavior of carbon in the atmosphere from September 1, 2014 to August 31, 2015.

Video: Antarctic ice loss 2002-2016
Curling snow drifts are magnified by the terrain around the 1,400 mile Dnieper River, flowing from Russia to the Black Sea. 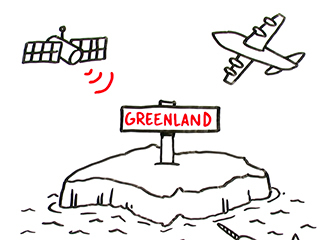 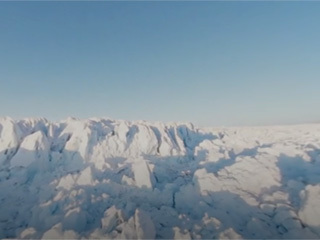 Greenland's ice from above
Video: NASA scientists release the first new global map of Earth at night since 2012.

Video: Lights of human activity shine in NASA's image of Earth at night
An animation shows several high impact events across the globe between August 2019 and January 2020, including the Australian bushfires. 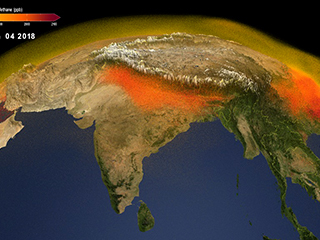 Video: Methane Sources
Video: The NASA satellite fleet in 2017, from low Earth orbit to the DSCOVR satellite taking in the million-mile view. 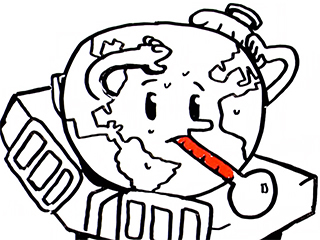 Graphic: Dramatic glacier melt
Video: Scientists combined an array of NASA satellite observations of Earth with data on human activities to map locations where freshwater is changing around the globe and why.

Video: For 15 years, GRACE tracked freshwater movements around the world