Scientists attribute the global warming trend observed since the mid-20th century to the human expansion of the "greenhouse effect"1 — warming that results when the atmosphere traps heat radiating from Earth toward space.

Gases that contribute to the greenhouse effect include:

On Earth, human activities are changing the natural greenhouse. Over the last century the burning of fossil fuels like coal and oil has increased the concentration of atmospheric carbon dioxide (CO2). This happens because the coal or oil burning process combines carbon with oxygen in the air to make CO2. To a lesser extent, the clearing of land for agriculture, industry, and other human activities has increased concentrations of greenhouse gases.

The consequences of changing the natural atmospheric greenhouse are difficult to predict, but some effects seem likely:

The Role of Human Activity

In its Fifth Assessment Report, the Intergovernmental Panel on Climate Change, a group of 1,300 independent scientific experts from countries all over the world under the auspices of the United Nations, concluded there's a more than 95 percent probability that human activities over the past 50 years have warmed our planet.

The industrial activities that our modern civilization depends upon have raised atmospheric carbon dioxide levels from 280 parts per million to about 417 parts per million in the last 151 years. The panel also concluded there's a better than 95 percent probability that human-produced greenhouse gases such as carbon dioxide, methane and nitrous oxide have caused much of the observed increase in Earth's temperatures over the past 50-plus years.

The panel's full Summary for Policymakers report is online at https://www.ipcc.ch/site/assets/uploads/2018/02/ipcc_wg3_ar5_summary-for-policymakers.pdf.

It's reasonable to assume that changes in the Sun's energy output would cause the climate to change, since the Sun is the fundamental source of energy that drives our climate system.

Indeed, studies show that solar variability has played a role in past climate changes. For example, a decrease in solar activity coupled with an increase in volcanic activity is thought to have helped trigger the Little Ice Age between approximately 1650 and 1850, when Greenland cooled from 1410 to the 1720s and glaciers advanced in the Alps.

But several lines of evidence show that current global warming cannot be explained by changes in energy from the Sun:

We Live in a Greenhouse

Life on Earth depends on energy coming from the Sun. About half the light reaching Earth's atmosphere passes through the air and clouds to the surface, where it is absorbed and then radiated upward in the form of infrared heat. About 90 percent of this heat is then absorbed by the greenhouse gases and radiated back toward the surface.

Is the Sun to Blame? 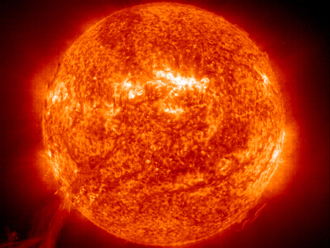 How do we know that changes in the Sun aren’t to blame for current global warming trends?

Since 1978, a series of satellite instruments have measured the energy output of the Sun directly. The satellite data show a very slight drop in solar irradiance (which is a measure of the amount of energy the Sun gives off) over this time period. So the Sun doesn't appear to be responsible for the warming trend observed over the past several decades.

Longer-term estimates of solar irradiance have been made using sunspot records and other so-called “proxy indicators,” such as the amount of carbon in tree rings. The most recent analyses of these proxies indicate that solar irradiance changes cannot plausibly account for more than 10 percent of the 20th century’s warming.2